Arriving at the surfers’ paradise

I arrive at the bus terminal in Allbrook, Panamá City. On the way here a young panamesian women pays the metro bus for me, because you need a special card to enter. It’s 0.25$ and I want to pay her back but she does not accept my money – way too nice. At the terminal I buy a trip to Las Tablas for 9.50$ and the bus is leaving in 15 min – lucky timing. I buy two bagles with cream cheese, because I didn’t have breakfast and go to the big red bus: 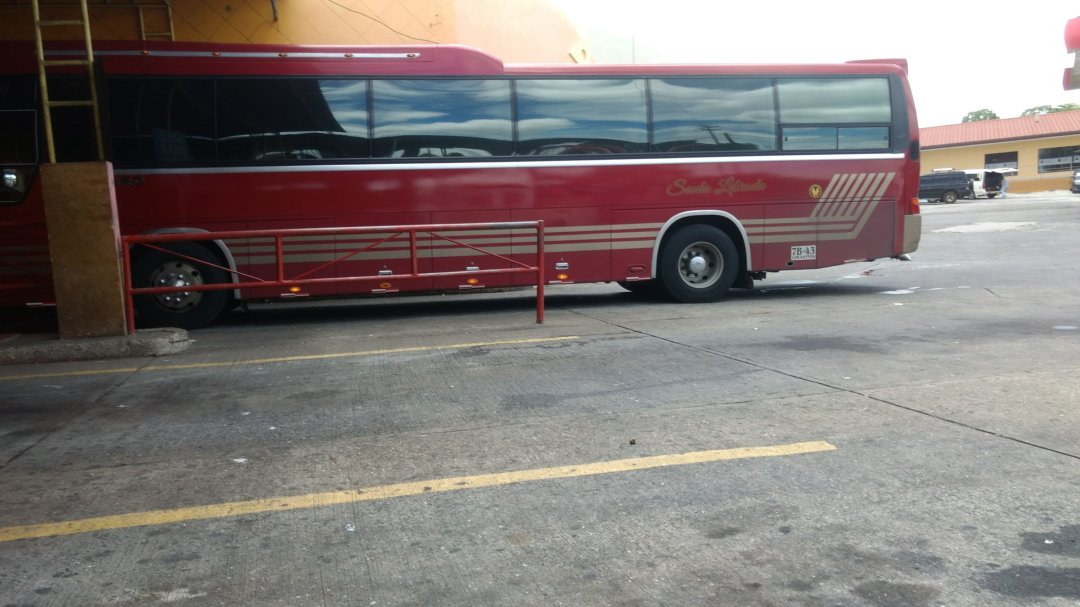 I have a lot of space, as only few people are on the bus. Some spanish music is playing but I decide to watch a movie (“The Secret”) on my tablet. At some point I remove the curtains, that are closed all around the bus, and I get stunning views into the green countryside of Panamá. On the way more and more people enter the bus. At some point an old panamenian guy enters and makes me unterstand that he wants the seat and I should move to the window. Even though I am still with my headphones, he starts talking to me. I find that quite nice – why not having a chat with a local, I think. So I close my tablet and put off my headphones. Unfortunately, he speaks with such a strong accent and seems to have been drinking before… Once I tell him that I am from Germany I get a casual “Ahhh Alemania! Heil Hilter!”. “Thanks for that”, I think ironically and make the guy understand that it is not okay to say that and that I disagree with it 100%. The guy seems to get a little angry but I can not understand what he wants to tell me… He asks me if I don’t like Hitler, what do I like, communism?.. I tell him no, but that I actually like it if people live in peace and help and support each other…. He then tells me that’s what they do in Panamá.. and I tell him that I like that.

People are already looking strangely at him and I feel a little uncomfortable.. but with this our conversation has ended and I turn back to my tablet. A few minutes later the old guy exits the bus. Looking outside I see that he carries a 15 cm knife in his belt and I feel a little lucky that I have not gotten in a fight with him. (However, later some people tell me that it’s normal here and people actually use it for work.)

When I get to Las Tablas it just rained and humidity is incredibly high. I take a taxi to the local bus stop. On the way I chat with the taxi driver and he tells me that Las Tablas is quite big with 15-20.000 inhabitants. Also, he tells me that it’s winter season until december and that’s why it rains a lot. However, I feel like the rain showers are always quite short.

I get to the bus terminal and some guy waits there with a bus. I ask if he goes to Tonosi (my next stop), he nods and says he leaves in 45 min. He puts my big backpack into the trunk and I hit the kiosk for some water. Then I find a bench close to some locals. Everyone is really nice and greets me. I take a picture of my “view” and my bus:

On the way the driver honks at everyone coming by. I suppose it’s how they say hi to everyone and I think it is quite friendly. We drive though green mountains and I can already spot the coast from far away. It’s a quiet ride so I get out my book and read.

Arriving in Tonosi I pay 3,60$ for the two hour ride. Asking the bus driver how to get to Playa Gúanico, he tells me to get a taxi or he would drive me for 12$, which he says is the taxi price. I forget to negotiate and say yes (in the end I paid way too much). On the way we talk a little about what I will be doing there and I tell him that I will be a volunteer for two month. He tells me I will love it and I am smiling on the inside 🙂

We go about 100 km/h in the small streets and I simply trust the driver that he knows what he is doing. Reaching a house on the side of the street he honks and a guy, supposively a friend, runs out and gets in the bus. He just worked for hours he tells me with a smile. At the place where the driver drops off his friend he picks up a small, very cute girl. For a second I think he kidnapps the girl because he just drops her dirty shoes and puts her in the front of the bus but she smiles and laughs so I think she is the friend’s daughter and he takes he for a ride to the beach. Later I realize it’s very typical for panamenians in the smaller towns that you pick up and drop friends and family on the way – for this they always have time. I say “Hola” but she is really shy and hides behind the seat.

We keep going fast, honking and everything on the way. I feel very excited to finally arrive. Once we hit the beach, the view is breathtaking.

The driver drops me in front of the hostel, I pay, get my stuff and I say goodbye. The driver wishes me that everything goes well – a very typical expression for the area.
I walk up the driveway and I feel at home right away.

You can see that the hostel was build with the love for detail and surfing. And the best thing, I think, is that it is right in front of the beach. 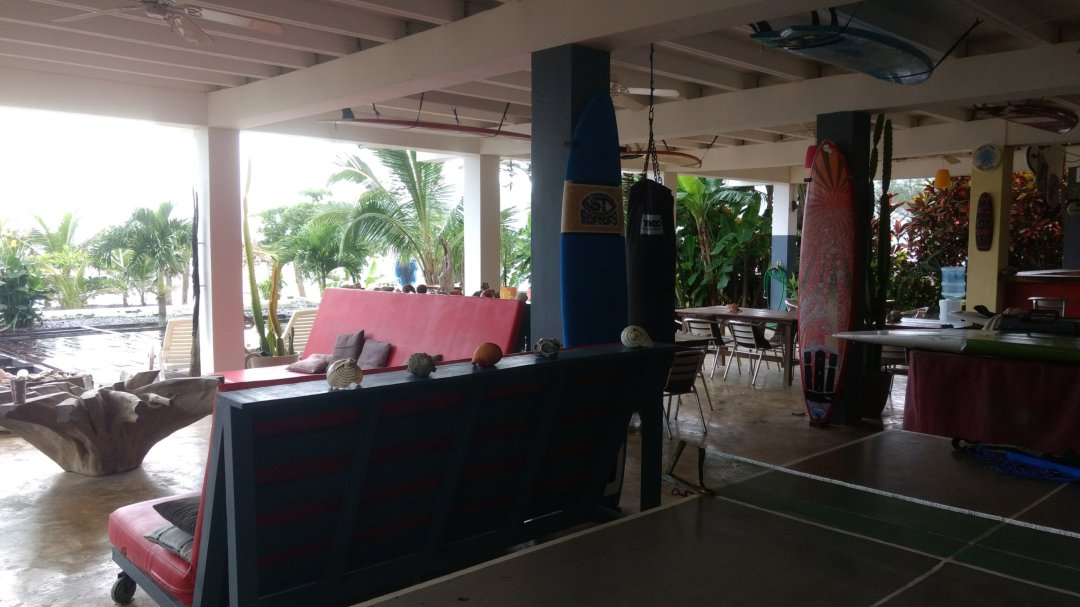 Walking into the hostel, I meet Stella, who is one of the other volunteers and from Hamburg. We get along right away and she shows me around and tells me everything about the hostel. A little bit later I meet Nico, the other volunteer, who just comes back from a surf. Our only guests at the moment are Jim and Steve, two Americans around their 60’s that are staying long-term. Everyone seems very nice and laid back – and I sense a very relaxing atmosphere. The owner of the hostel, Nic, is currently gone to Panamá City and will come back soon.

Here are Stella and Nico plus Suki, the hostel dog. Not pictured is the hostel cat, Niki. 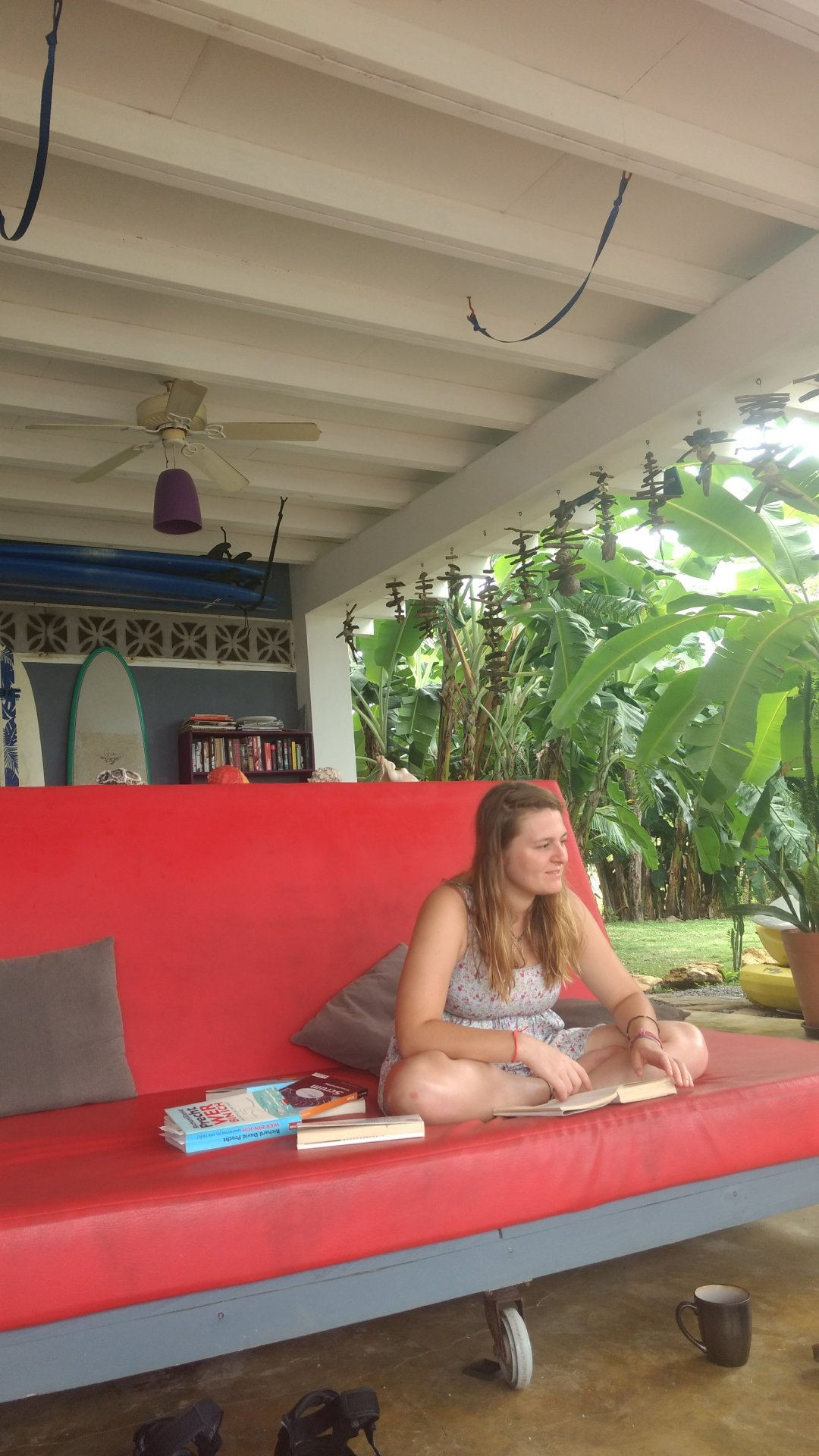 I decide to pass the remaining day in the couch with Stella, because the waves are too high for my beginner level of surfing. We grab beers and talk about the life here and in Hamburg. She actually lived and worked in Panamá for almost two years already and knows the country and its people, so it’s interesting to listen.

Later we cook Panamenian food, which is spiced chicken, rice and salad. Even though I want to cut down on meat consumption, I decide to give it a try and it actually tastes really good. The dinner lasts spanishly 1,5 hours. Afterwards we clean everything and go to bed. Since the sun goes down at 6 p.m., it already feels like 12 p.m. even though it’s only 10 p.m. Nico asks me if I want to go surf in the morning and I tell him I will join. Going to bed I try to check my phone and realize that there is no WiFi or cell phone service. At first I am a little bit disappointed, as I want to tell my family that I arrived safe but then Stella tells me that I just have to walk 100 m until the “Magic tree” – that’s what they call the tree where you can get service. I walk there, write a few messages and then go to bed.

Super tired but looking forward to get up early the next moring to coger unas holas.🌊

View all posts by Jonas