It’s 8 a.m., I get up and have breakfast with Jorge. Well, it’s more that I prepare him fried eggs an he acompanys the workers that install pay-TV in his room, but thats the least I can do for his incredible hospitality.
When he leaves for work, I hit the city. He lends me his bus card but I decide to just walk and explore the city by feet – even if it’s 26° degrees and humid as always. Around his area it looks like this: 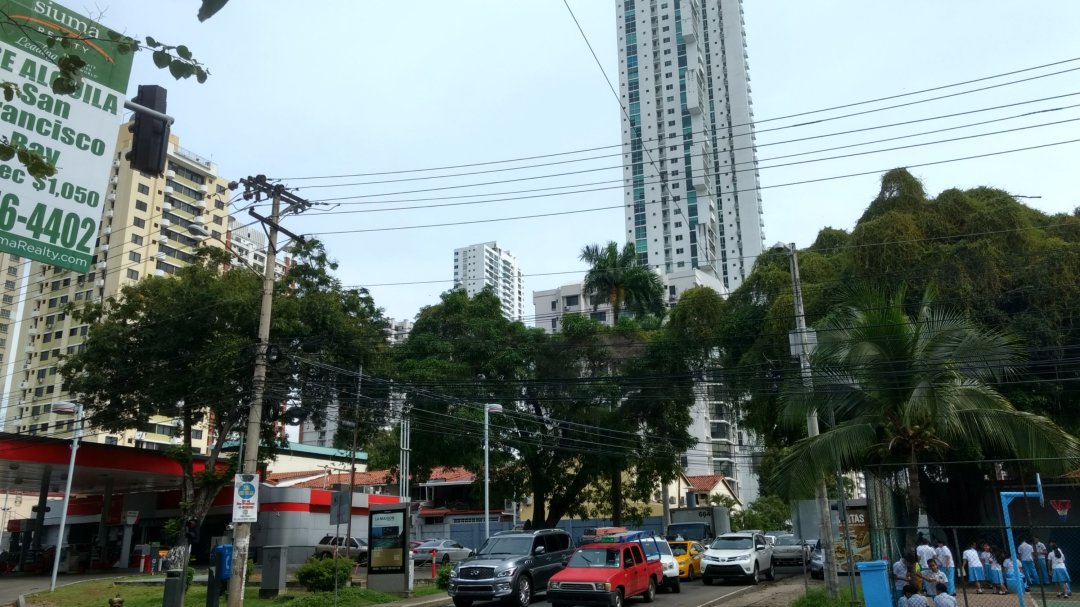 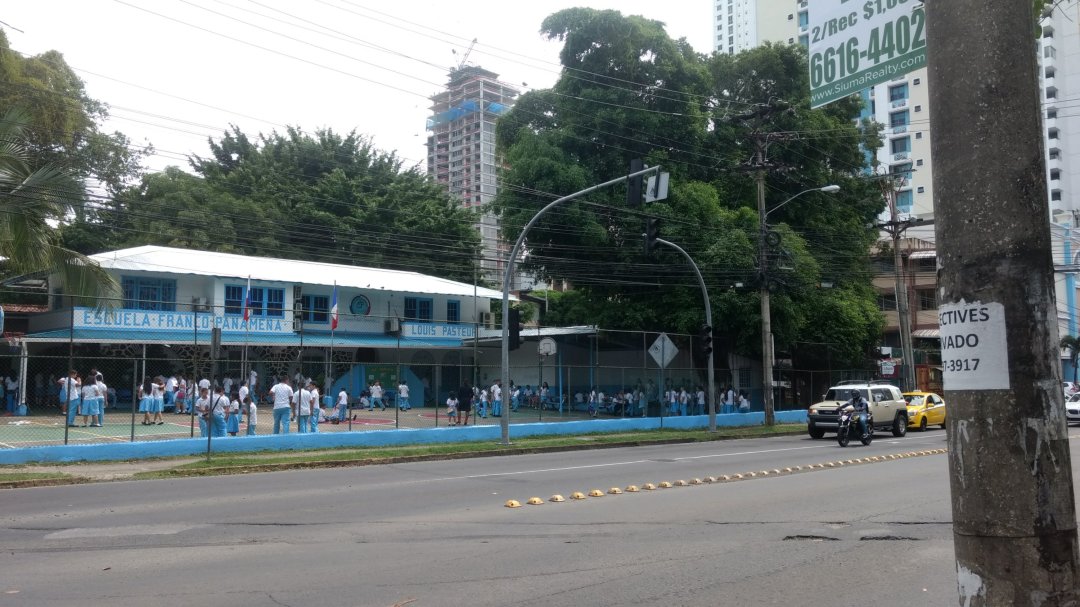 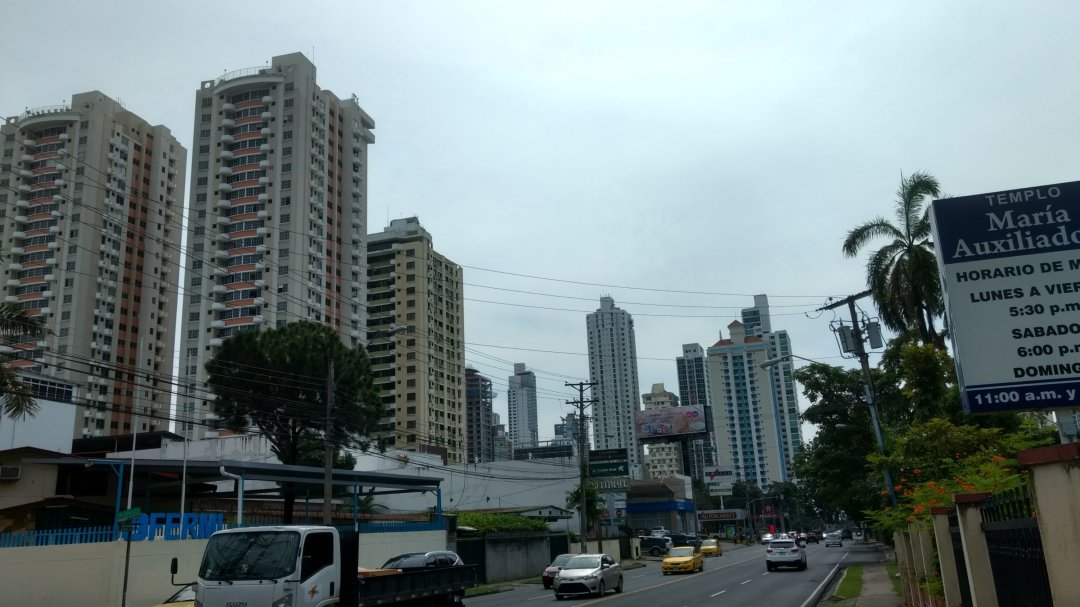 All in all many tall buildings. I arrive at the mall and buy a SIM Card from “Mas Movil” – 5$ for 1GB of internet for 7 days. Not a bad deal. The charger for latinoamerican plugs, however, costs me 20$. This shopping trip and a coffee and bagel for lunch leaves me with 12$, as I thought 40$ for the day would be enough.. well, I guess I have to live more economic for the remaining day.

I keep walking towards the sea. My goal is “Casco Viejo” the old part of town with “normal-sized” houses, bars, shops and restaurants. Another recommendation from Chen, that I met on the flight here.

As I keep walking I pass even more skyskrapers, however, the city still seems to keep some greenery. 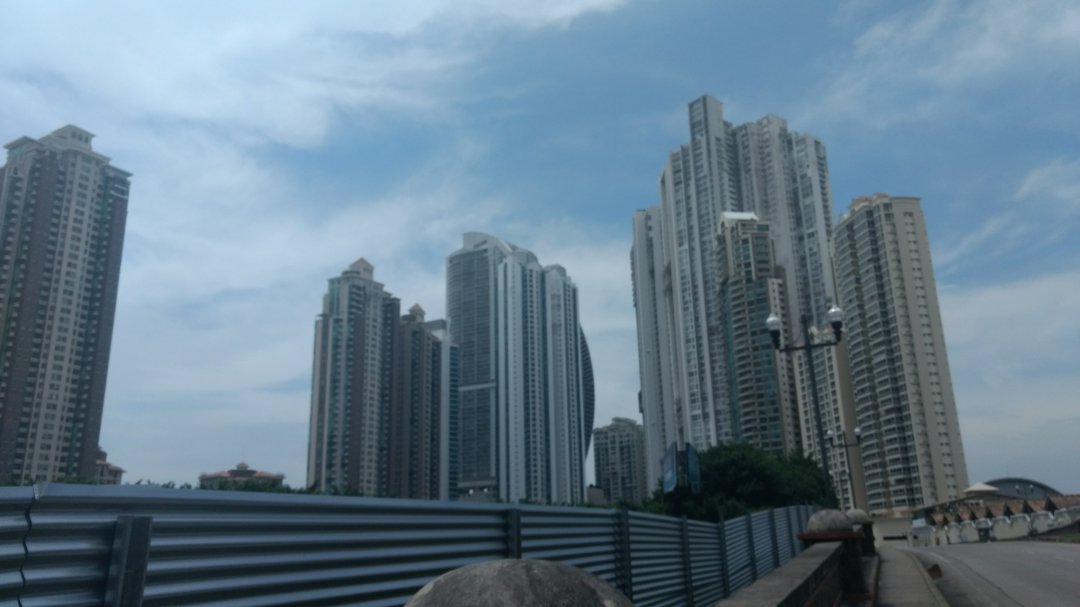 It’s still super humid and I am sweating like crazy. Once I hit the sea I switch my t-shirt for a tank top. Since it’s cloudy I decided not to put on sun screen, a big mistake as I will see 3 hours later on my neck, shoulder and nose. But I guess that’s one of the lessons I will be taught here. 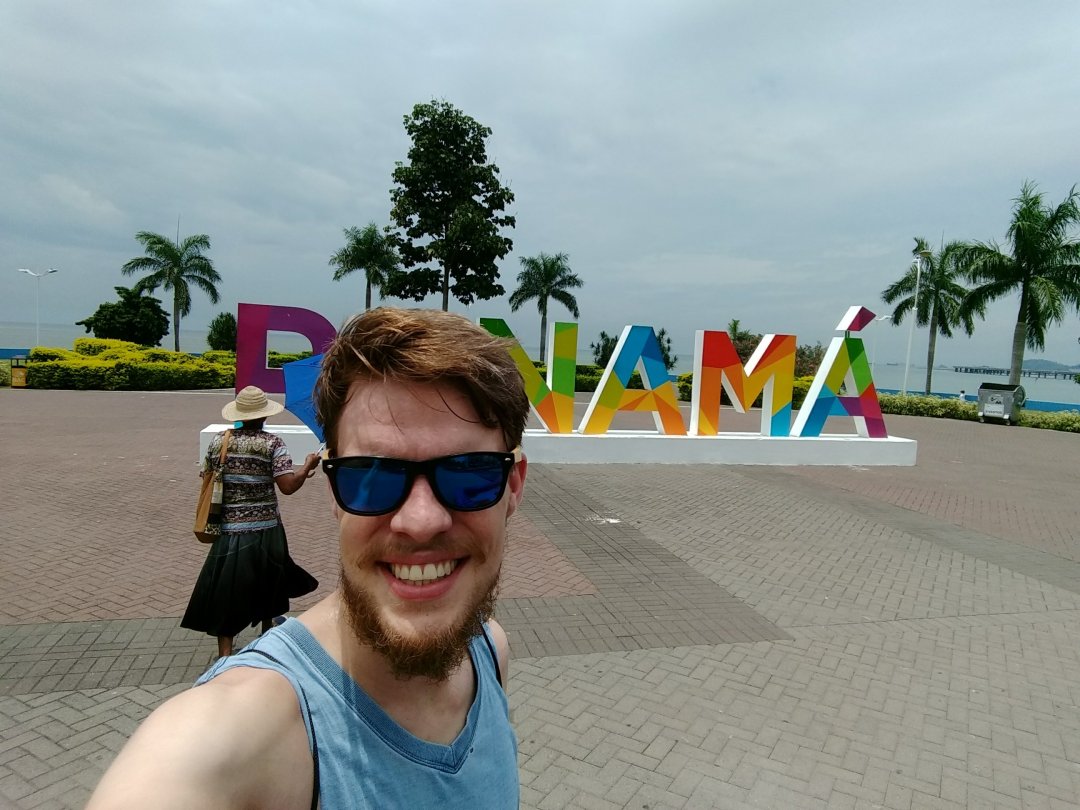 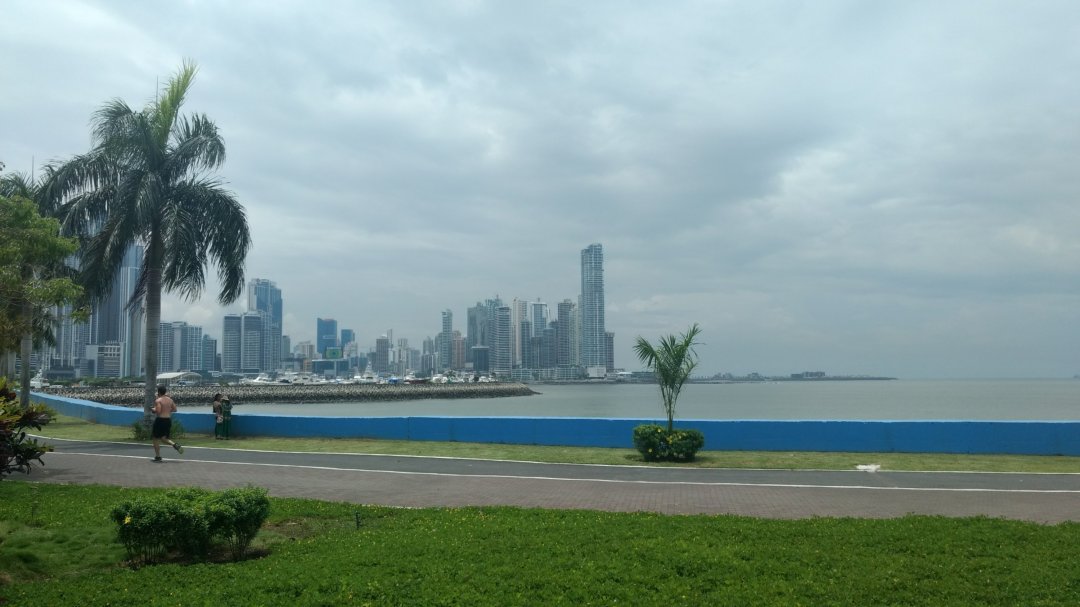 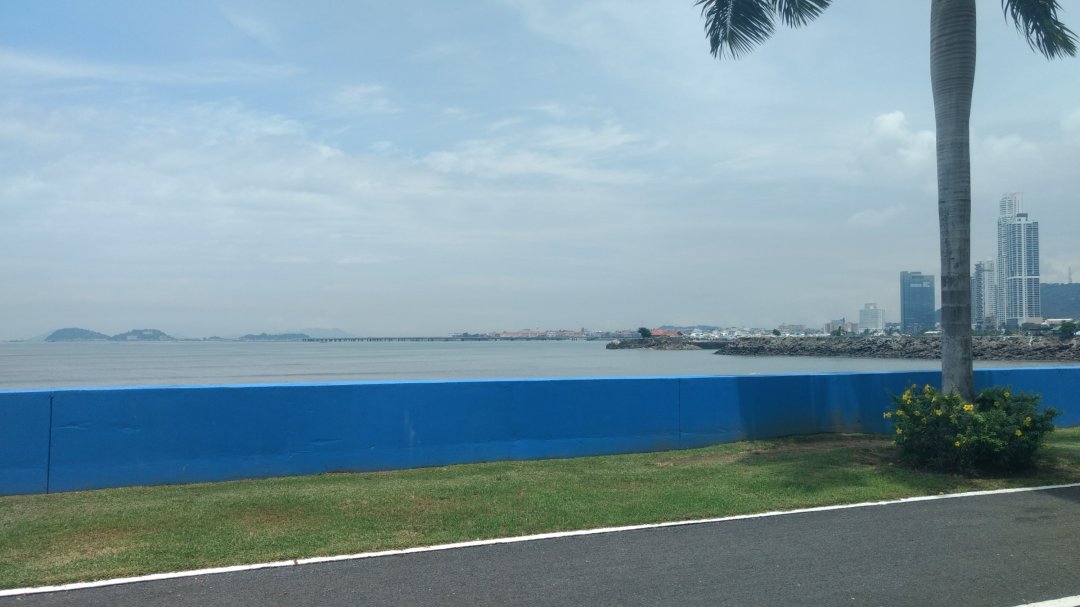 After about a 5 km walk along the sea, I get to “Casco Viejo” and you can already see the difference to the other parts of town from far away: 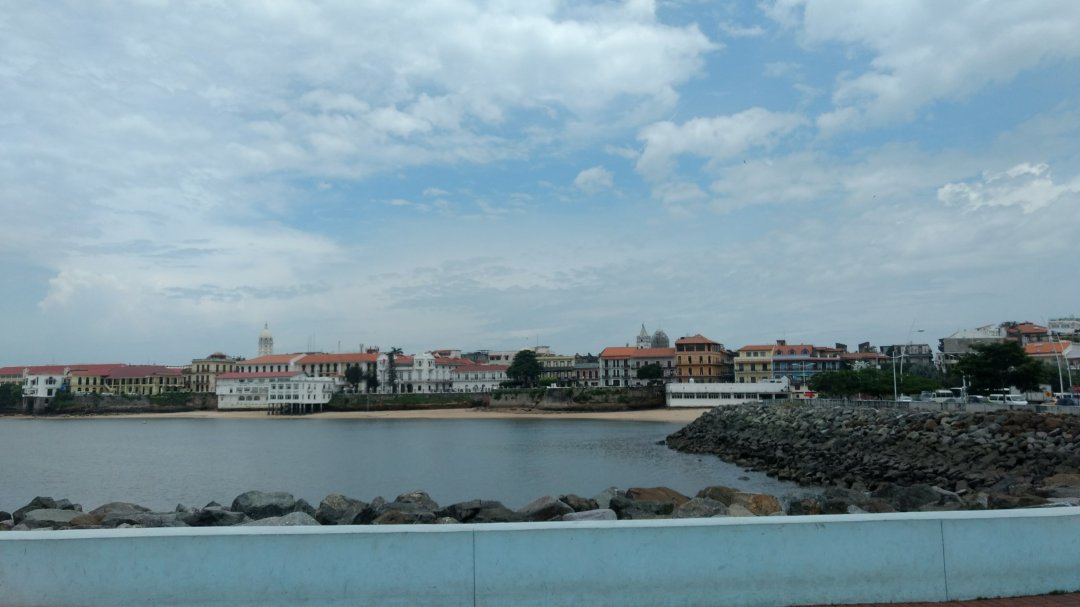 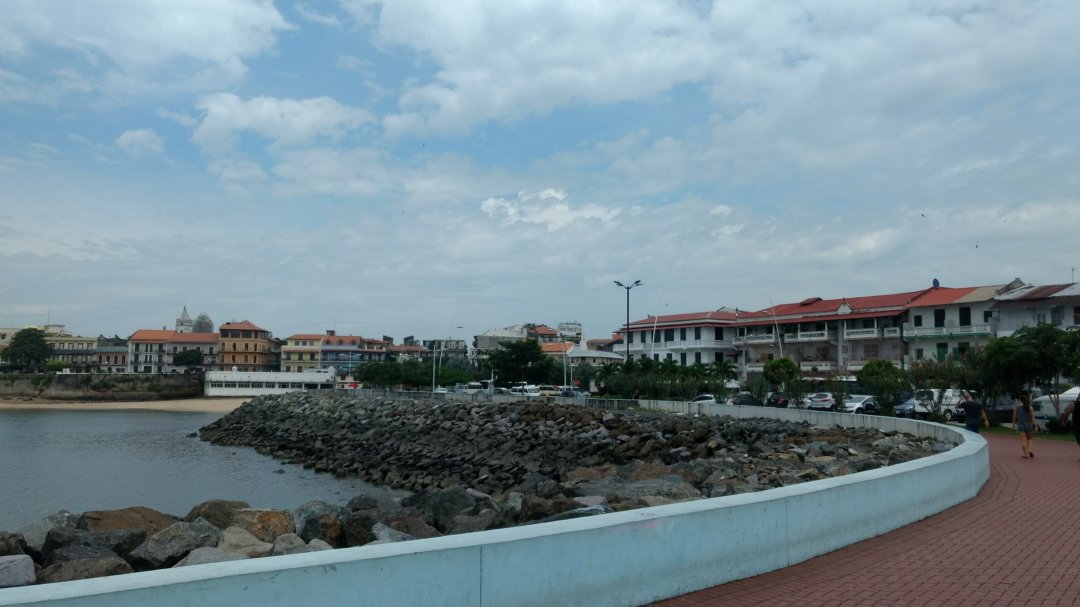 I pass by the “mercado de mariscos” – the famous seafood market. Obviously it smells like fish everywhere and about three people offer me to eat at their restaurant, which I have to decline due to my current financial situation. (For safety reasons I also left my cards at Jorges place.) 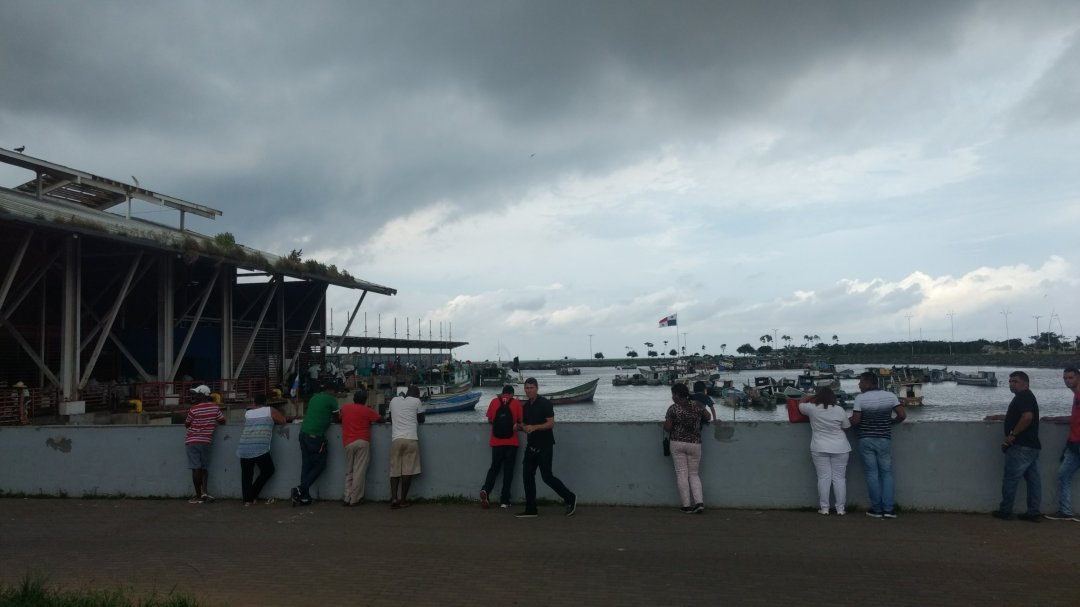 I just keep walking without a specific direction and get to know the old part of town – but see for yourself: 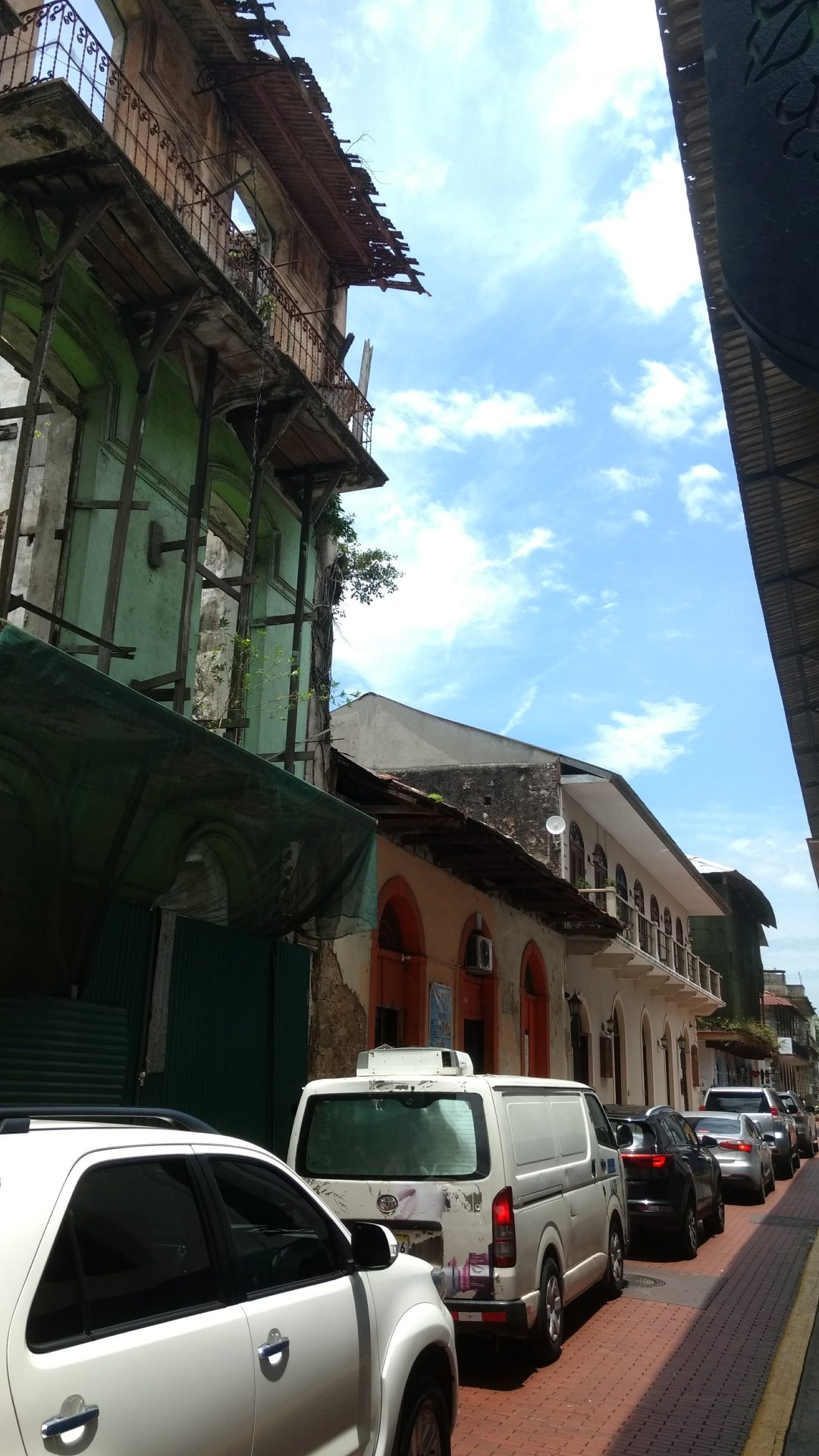 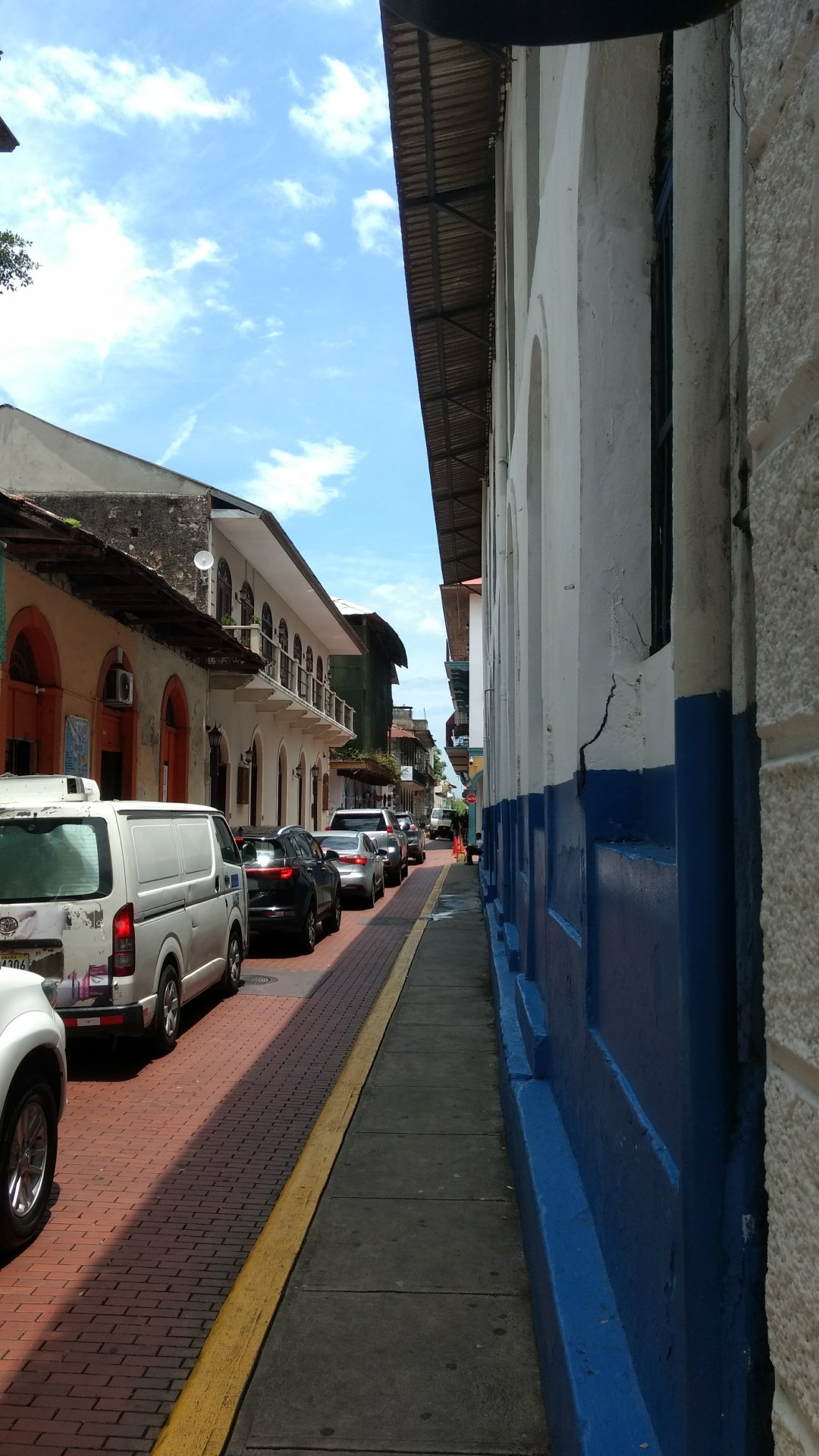 I find a restaurant that seems local, so I check the menue: fish with rice, “small beans” and fried banana for 3,50$ and I think: “great, thats in my budget!”. Here is the “view” that I have from the restaurant: 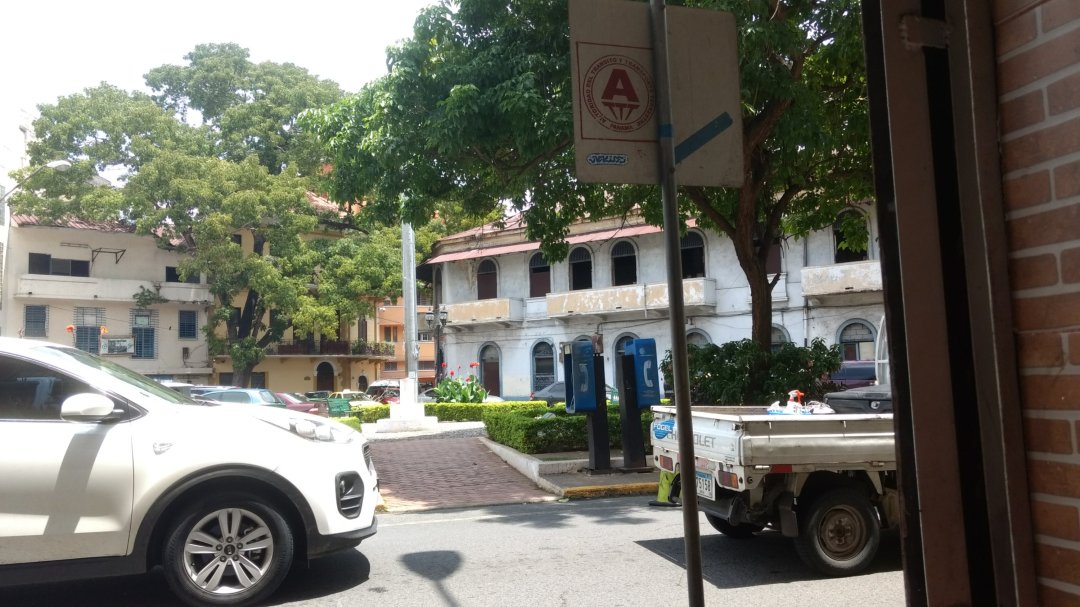 I have a talk with the restaurant owner who tells me to never leave my stuff unattended in Panamá. But he also points me into some directions, where to go to see a nice church (whose name I forgot). After that I just keep walking and also see some poorer parts of the area. 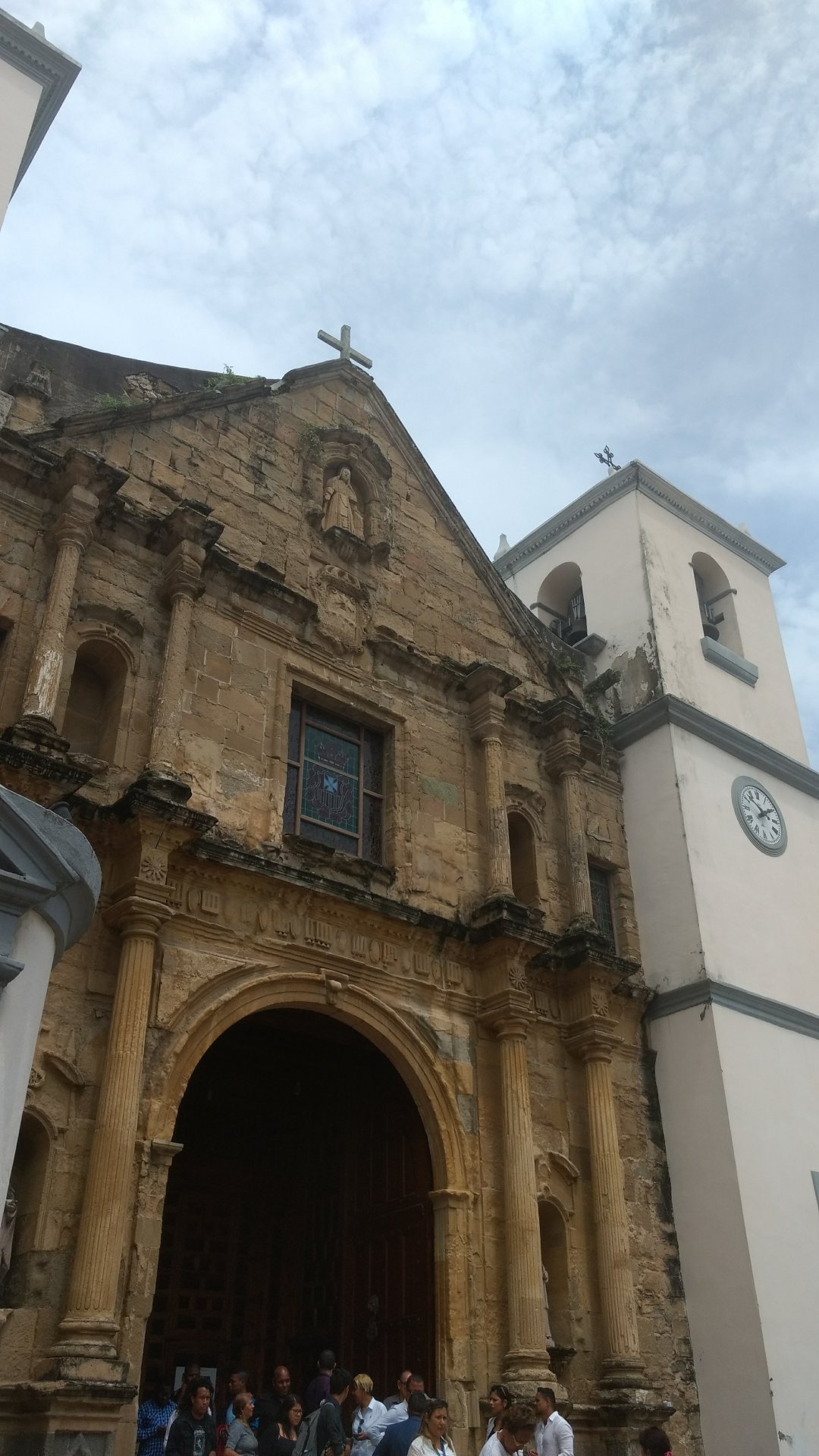 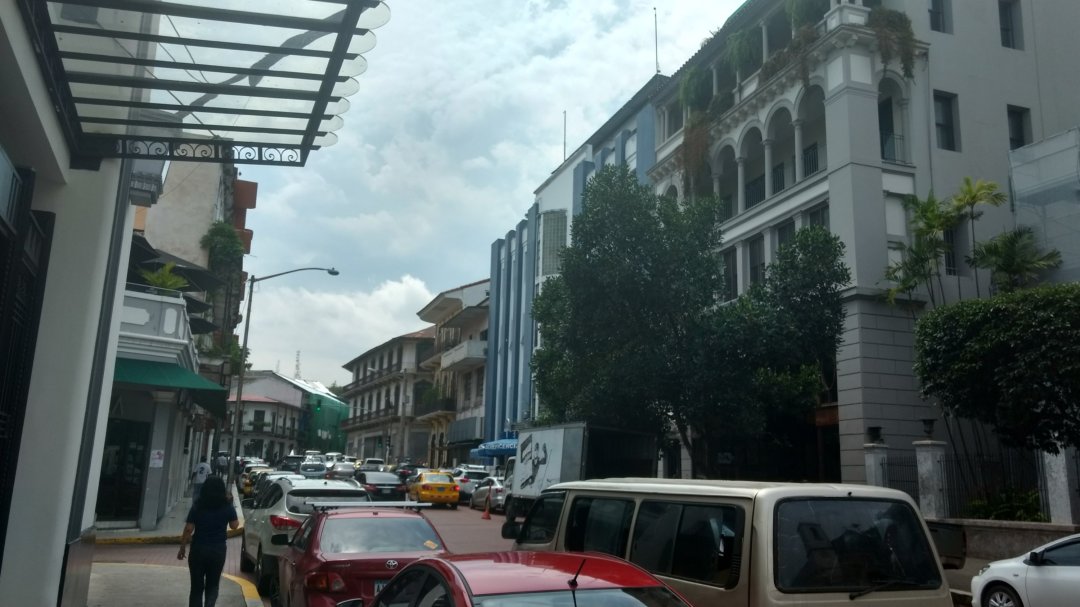 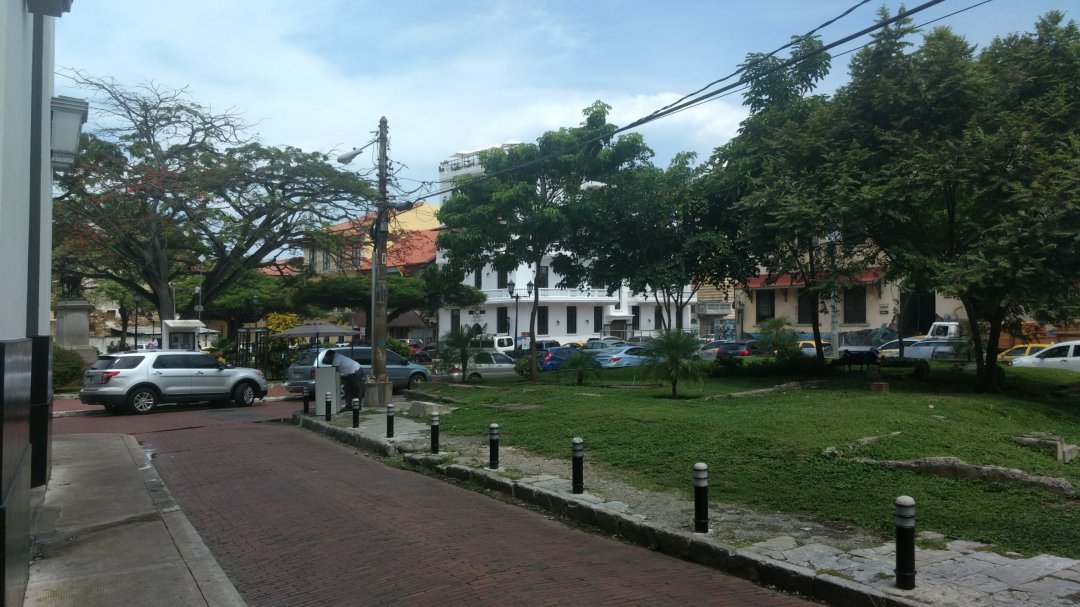 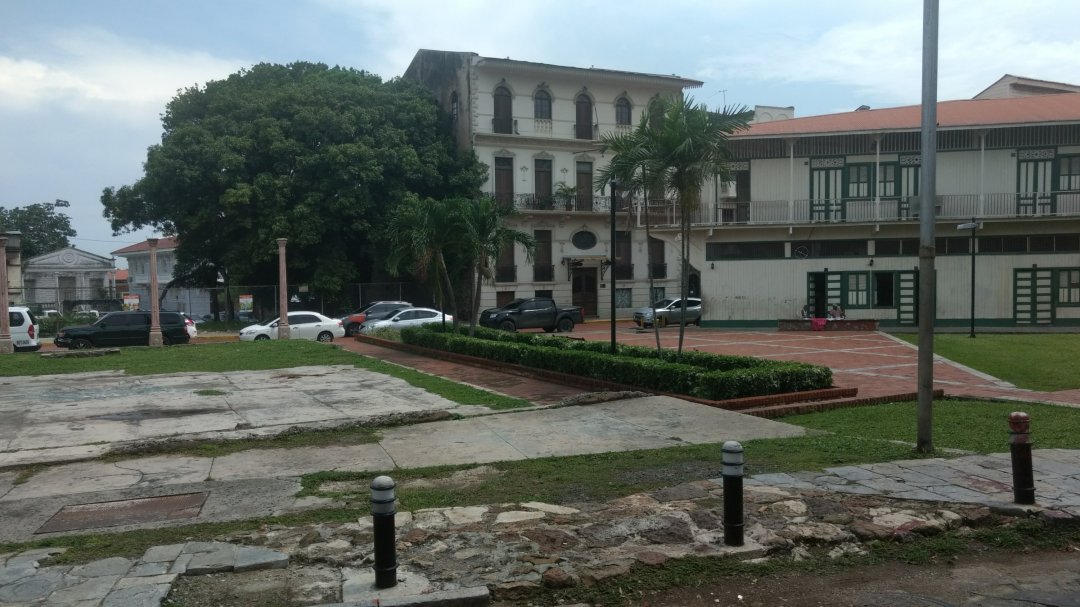 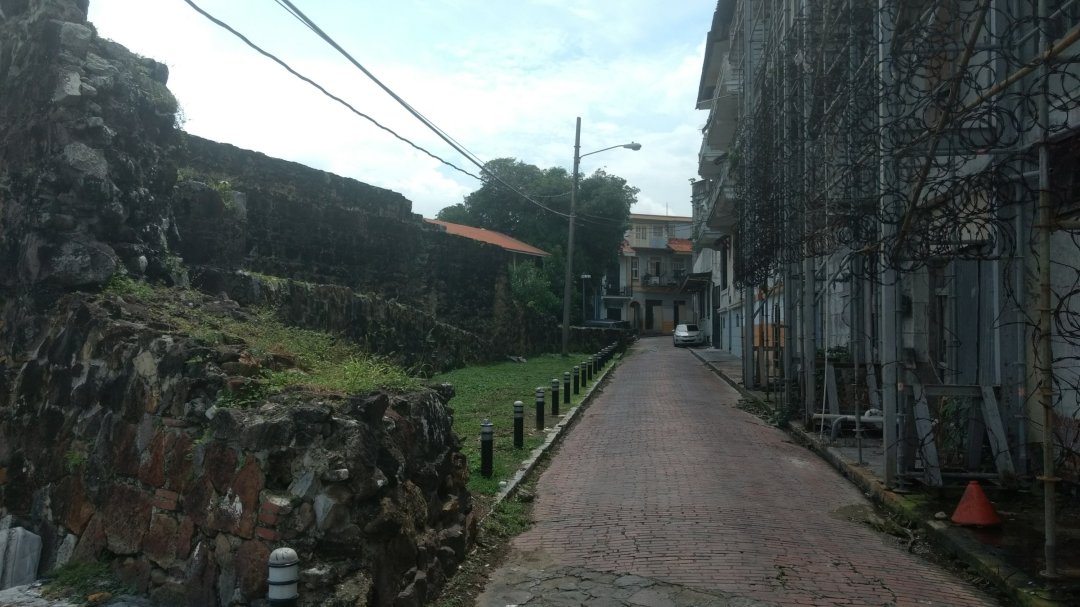 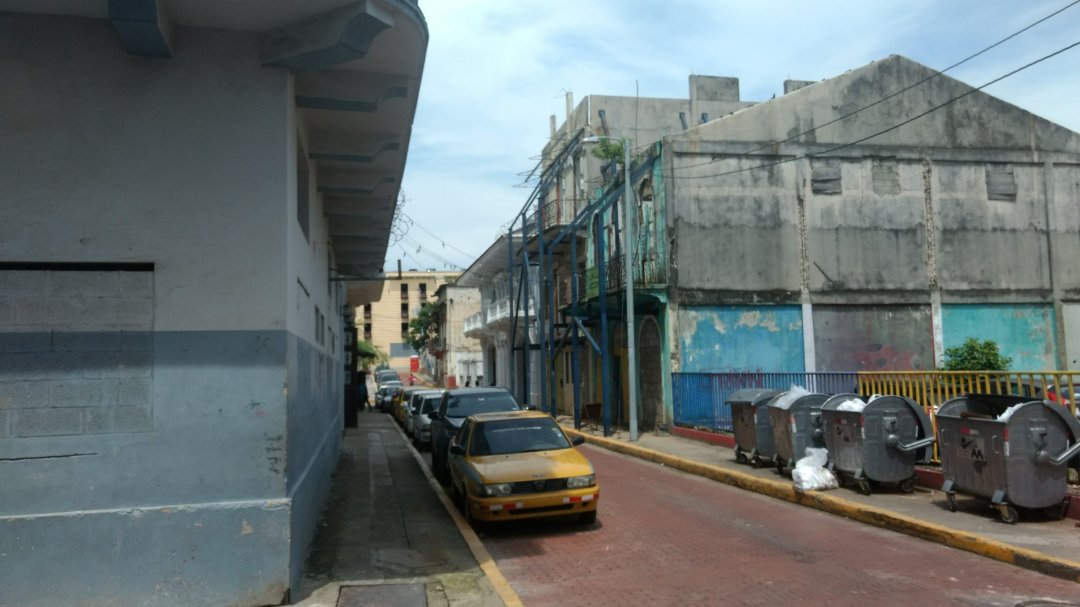 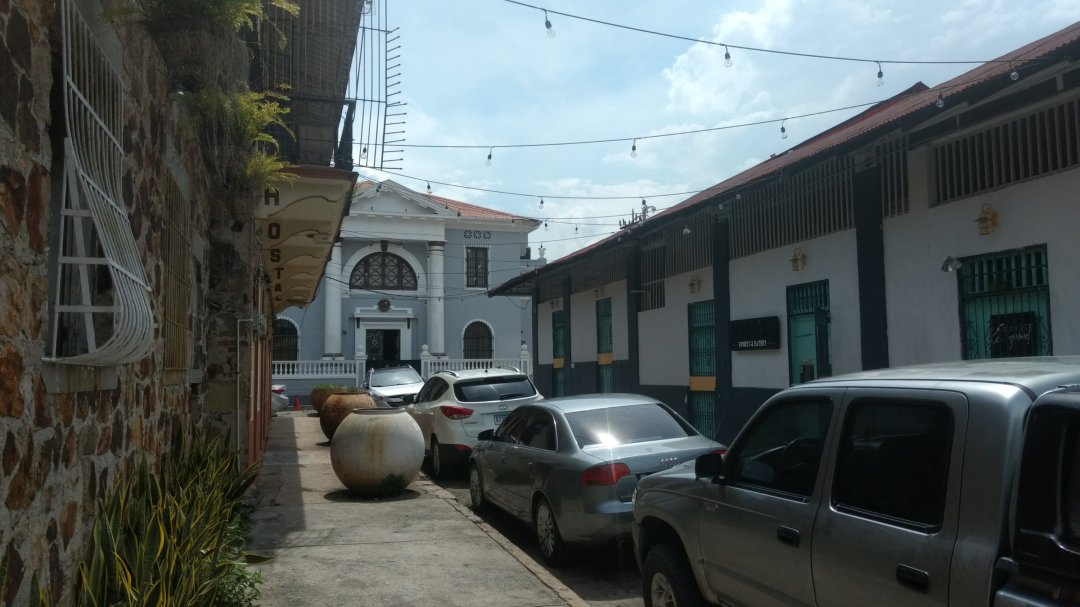 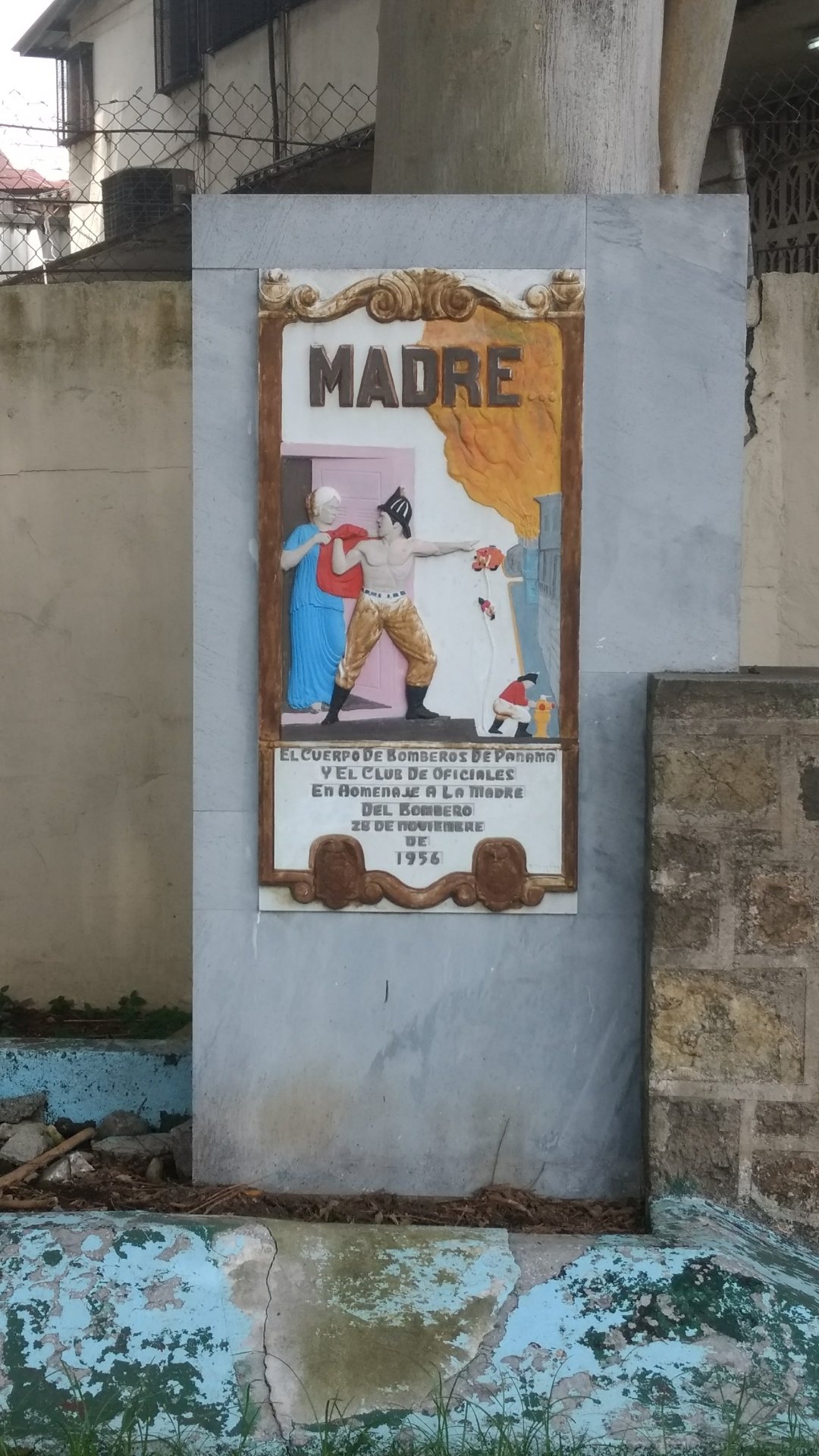 But even here in the poor area, Coca-Cola is present:

At some point I hit a busier street with many shops: 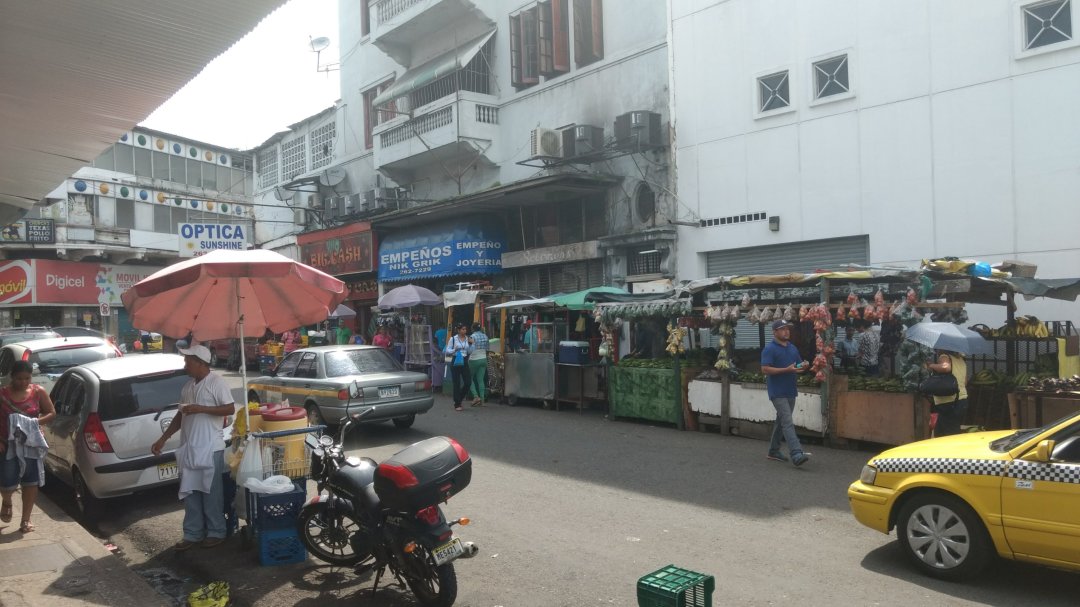 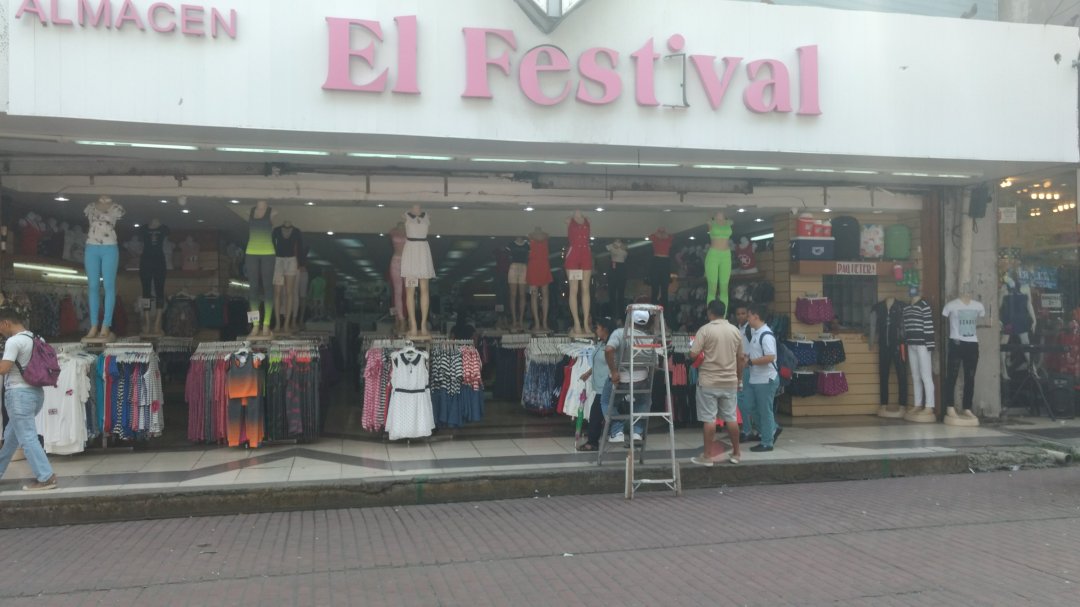 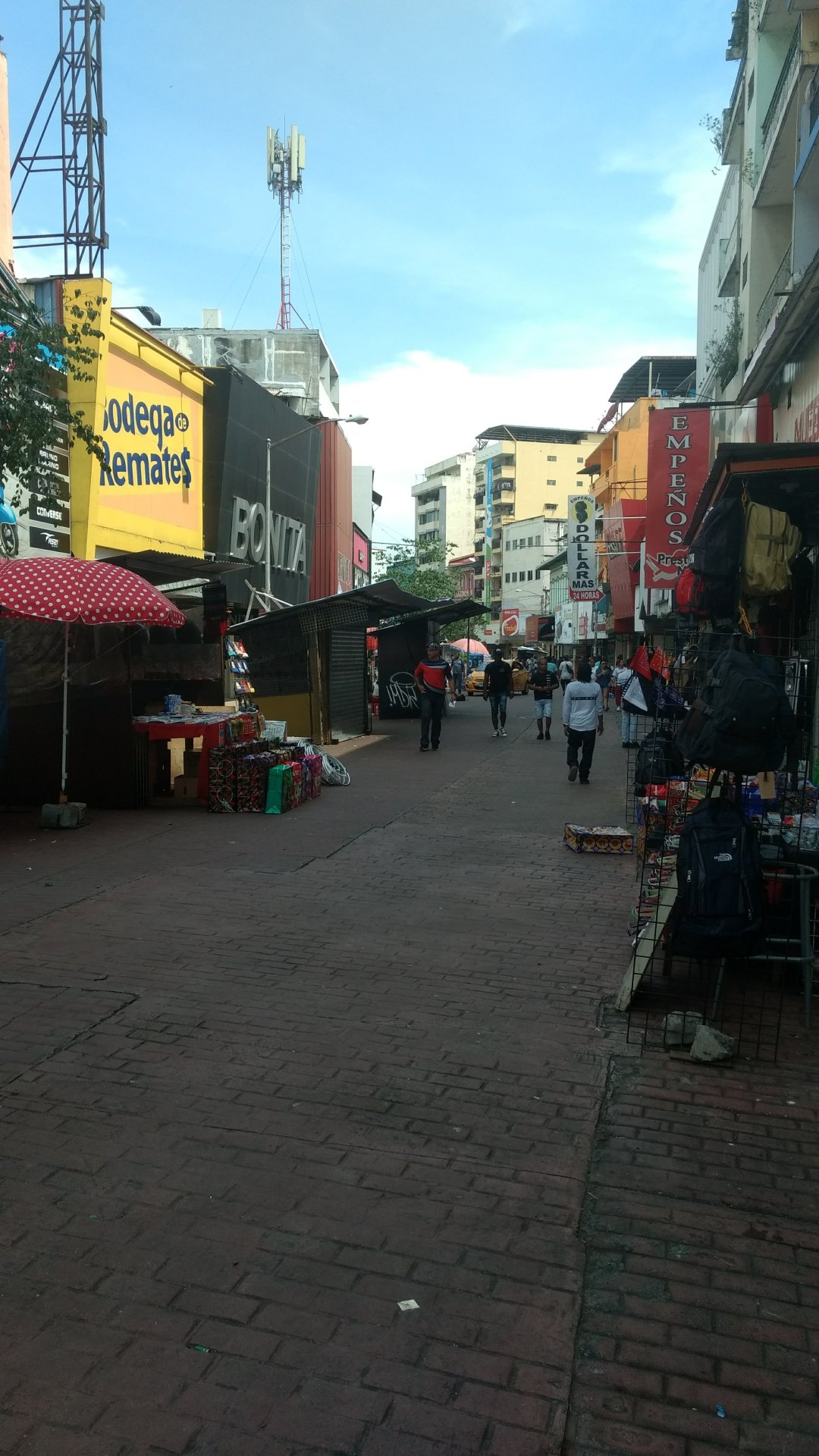 After that street, I spot a park and I decide to rest there for a while. I buy myself a Budweiser and a water and walk to the park. There are policemen controlling. (There are a lot in the city actually.) So I ask one guys about the law of drinking in public. He tells me in Spanish: “It is okay if you have a bag around it and take a sip so no one can see. But no, you can not drink in public.” This answer is a little bit confusing but I figure I will have to keep my plastic bag around my beer.

This is the view from my bench: 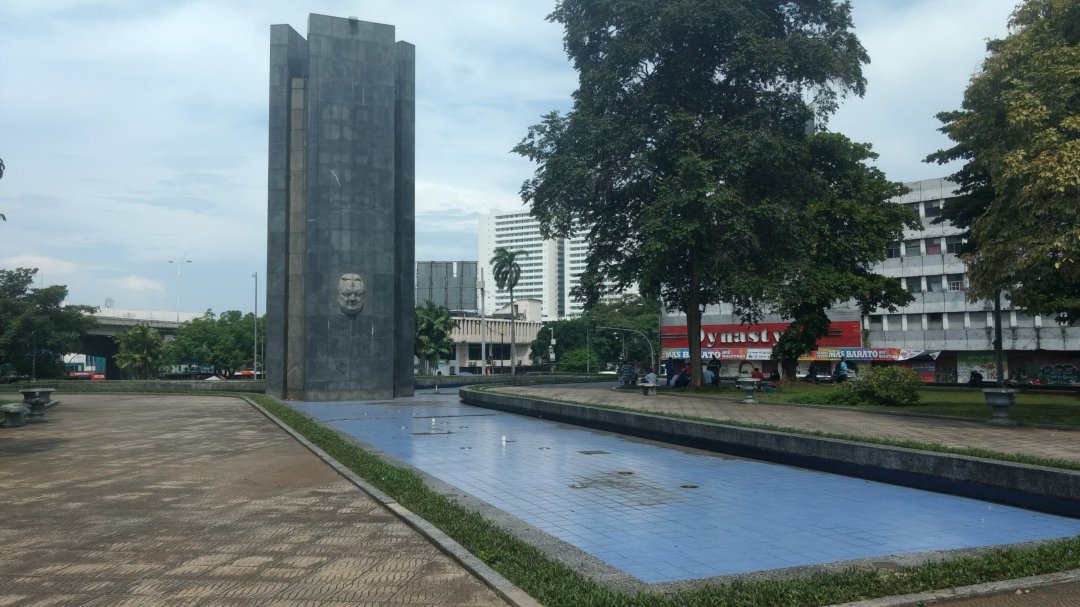 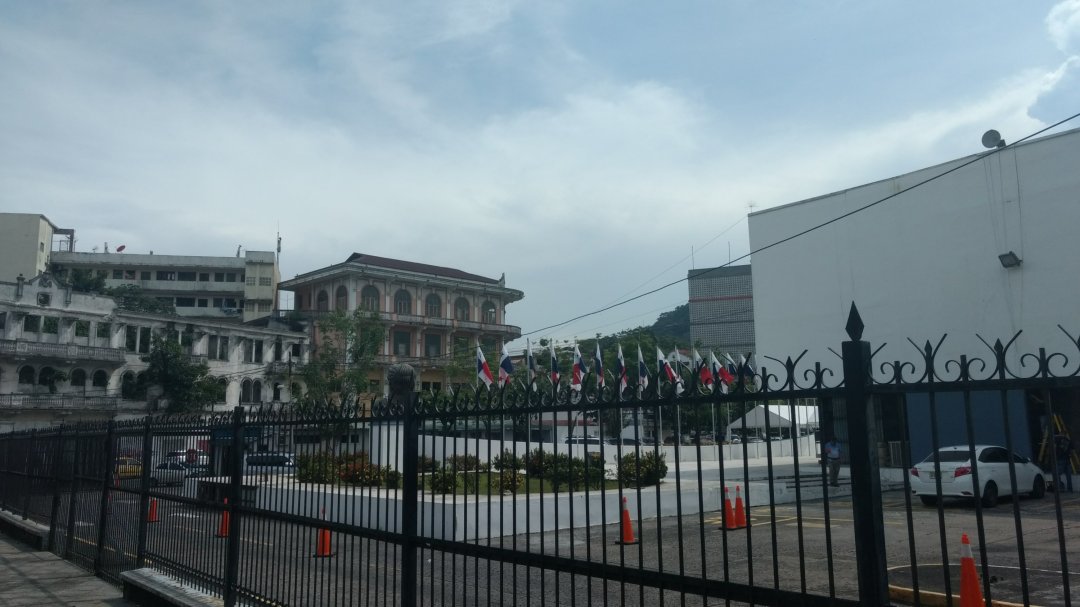 I open my book and enjoy the cold beer. At some point the same policemen come by and I hide the beer. They make the sign that means “I see you” and for a second I am afraid I will get fined because I am the touristy-gringo-guy. (Later Jorge will tell me that you actually go to jail for drinking in public.) In the end they keep going and I get lucky. But I guess they don’t enforce the law so much, because 5 min later a few teenagers smoke a joint a few meters from my bench and it smells heavily. However, the policemen, who are now a little farther away but most likely smell it, don’t do anything.

About 30 min later I decide to go the direction to Jorges house, because it’s 4 p.m. and I am broke. I text him and he tells me that he has to work until 7 p.m. at least. That’s when I decide to go back to the sea at the promenade called “cinta costera” and read there: 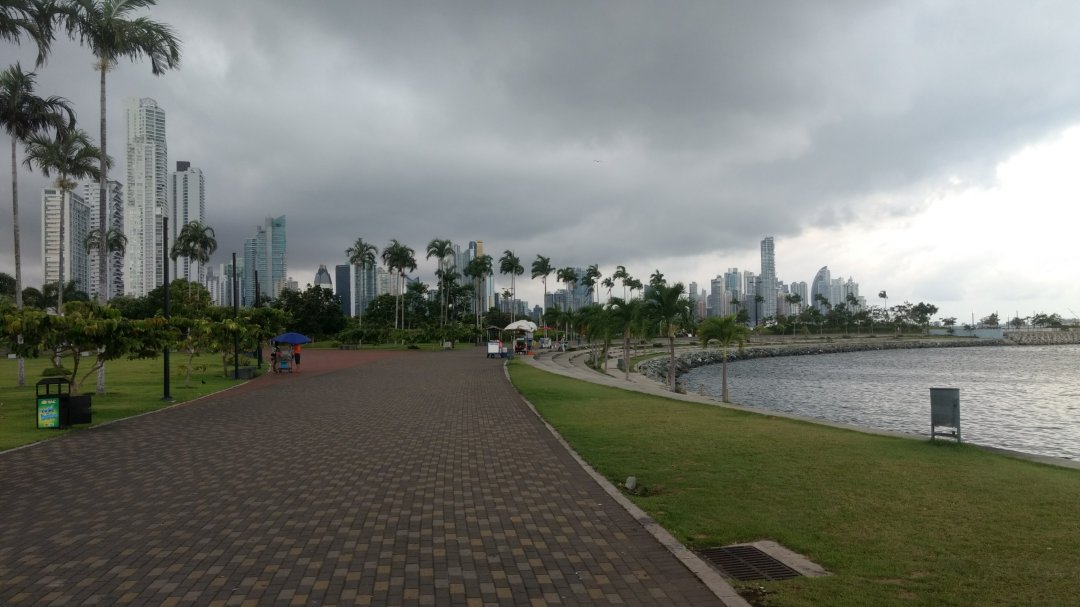 I pass 2,5 hours there and then catch a bus to Jorges house. Right on time because it starts to rain heavily. (Apparently it’s winter season and that’s why it rains a lot.)

Everyone in the bus looks at me… I guess because I am the only blond person. But it doesn’t really matter to me and I just smile back 🙂

Later Jorge and I grab street food and a few beers and spend a nice night with him. We hit a bar that serves a million of beers and I make him try a “Krombacher”, which actually is from Germany. I choose a “Leffe” from Belgium and that makes it 15,60$ on the bill… it seems like international beer has its price in Panamá. After that we hit a kiosk for more beer and go back to his house. I help him with his application for German university and a scholarship and we fall asleep.

The next morning I pack my stuff and we go downstairs. It rains heavily. Almost like Panamá City is sad that I will leave 😉

Jorge explains me the way to the bus terminal and we take a sweet selfie: 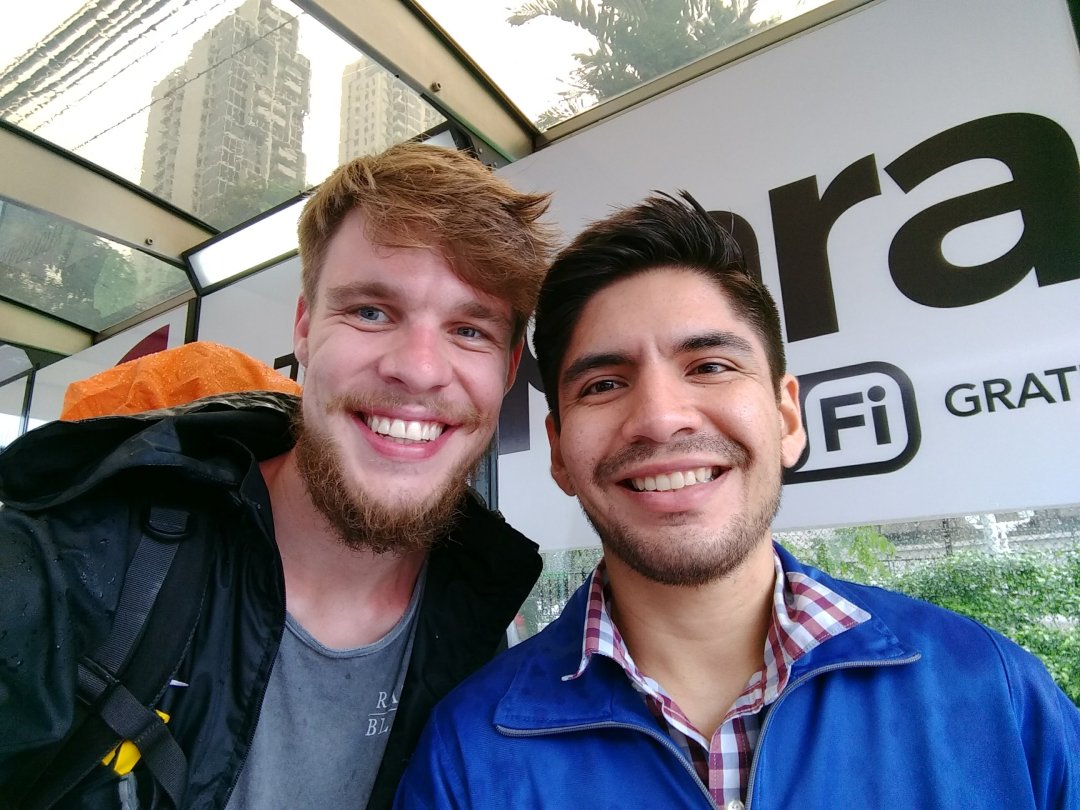 Thank you for everything, Jorge!

View all posts by Jonas